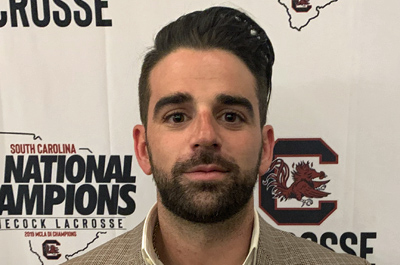 A native of Memphis TN, Peter moved to Columbia SC and was a 3-year varsity starter at Blythewood HS. A 2x All-State Attackman and invited to the North South game. He went on to play Lacrosse at Limestone College for 2 years and transferred to South Carolina shortly after. Peter was the head coach for a successful club team in Columbia called the Midland Mallards for 5 years. Peter assisted at River Bluff HS in Columbia for a year and also coached at AC Flora HS where he led their team to their first ever Upper State Championship and runner up in the state finals. Peter lives in Columbia and has been the offensive coordinator for the Gamecocks the last 4 seasons.